Laurie Oakes' remarks at launch of John McEwen: His Story 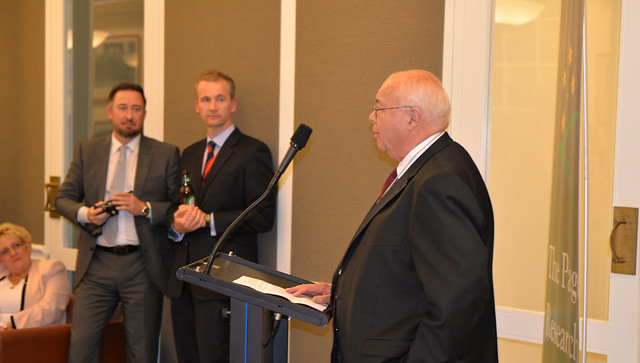 This speech was delivered by Laurie Oakes to launch the re-publication of John McEwen's autobiography "His Story". It was delivered in the Nationals Party Room on 21 October 2014. More information is available on the book here.

It's one of the pluses of having been around as long as I have that I knew John McEwen. I don't claim I knew him well. But as a young political journalist on the Sydney Mirror I travelled with him in the 1966 election campaign through a string of rural and regional seats in NSW and Queensland. And during his last couple of years in politics, by which time I'd become Canberra bureau chief for the largest circulation paper in the country, the Melbourne Sun News-Pictorial, I used to drop into his office occasionally for a chat.

I learned a lot about politics from those chats. And I learned a fair bit about John McEwen. I admired him. He is one of the few people I've met in 50 years of journalism who I think deserves the description "great".

On this day, I should say that Gough Whitlam is another I thought qualified for the description. And there are links between the two.

When Gough delivered his maiden speech in 1953, John McEwen interjected and had to be reminded by the Speaker that traditionally members giving their first speech are heard in complete silence. It wasn't a particularly nasty interjection, and was about Whitlam's predecessor as the member for Werriwa, not about Whitlam himself. But McEwen was mortified that he'd done the wrong thing and sought the new young member out and personally apologised.

And, as McEwen reveals in this book we're launching, he worked for Gough Whitlam's father Fred as a 15-year-old would-be public servant. Fred Whitlam had also been Lady McEwen's boss. In his last parliamentary speech before retiring, Sir John said:

On many occasions I have been in the home of Whitlam senior. I have been unrestrained, as was my duty and as I conceived it to be, in hitting out at the leader of the Opposition across the table in this place as the occasion required, but I have always had a little notch at the back of my mind remembering that I was unfortunately hitting at the son of a man whom I had very greatly respected.

In the foreword to this edition of John McEwen-His Story, Warren Truss writes that "Sir John's formidable appearance and his serious, resolute and sometimes testy manner, earned him the tag 'Black Jack'." Warren goes on: "I am told that Menzies, who was a great admirer, liked to call him 'Le Noir'."

That's true, Warren. I hate to tell you, though, that Ming claimed he only called Black Jack "Le Noir" when there were other Country Party people present and he didn't want them to know what he was saying. That's an example of Menzies' wit. That kind of wit might help to explain why Earle Page hated him.

Menzies, in fact, was responsible for both the French and the English versions of the McEwen nickname. On his last day in Parliament before his retirement in October, 1970, I had a cup of tea with Sir John. It was just before he went into the House to vote in his last division. And I asked him how he came to be called Black Jack.

He said: "Menzies, who had been reading his Scottish history, found a character named Black Jack. I never bothered to look up what he was. Menzies just popped the name on me and it stuck."

I've got strong memories of that cup of tea in the deputy prime minister's office in Old Parliament House . I came away with a quote in my notebook that summed up the bloke Warren describes as "perhaps the greatest of the Nationals' leaders". I don't think, by the way, that there's any "perhaps" about it.

The quote I'm talking about was this. "I'll fight for a thing for five years...seven years...till I damn well get it." I'd like to see more of that commitment, that passion, in politics today. Black Jack was a fighter. And he certainly was, as Warren says, resolute.

But another thing McEwen said to me that day was: "I'm sure there's a difference between strong determination and ruthlessness." The word "ruthless" implies a callousness, a coldness, and that wasn't John McEwen. Just reading this book tells you that.

Black Jack McEwen spent 36 years in Federal Parliament, 25 years in the Cabinet and 12 years as leader of the Country Party and deputy PM. He was prime minister in his own right for 22 days after the death of Harold Holt in 1967. But on top of that he had been acting prime minister 4 times for a total of 550 days. Think about that. More than a year and a half acting as prime minister.

It's an extraordinary record.

1996 was my first federal election campaign, so some things about being on what would now be called "the Wombat Trail" with Black Jack McEwen have stuck in my mind.

I recall that, early on in country NSW, there wasn't much interest in the election. McEwen campaigned the old-fashioned way, addressing open-air meetings mostly from the back of a trucks. And he was a good speaker. But often the street corners were almost deserted. In Gundagai, I remember, he attracted a crowd of one.

That seemed to change at an unscheduled whistle-stop meeting outside Conkey and Sons' meatworks in Cootamundra. When I say whistle-stop meeting I mean it literally. McEwen climbed on to the back of a truck and started to speak as the factory whistle blew for the morning tea break.

More than 150 workers, in overalls and blood-stained aprons, gave up their morning tea to come out and listen to him. They clapped and cheered when he told them their jobs depended on the trade agreements he had negotiated with Britain, the US and Japan. He talked about the Vietnam war and the importance of the American Alliance.Then the factory whistle blew again and they all went back to work.

The campaign picked up after that. In Mackay, Black Jack was introduced as "Australia's greatest contemporary statesman", a comment given weight by his refusal to join in the personal slanging match that marked and marred the campaign.

But I do remember him getting stuck into the Liberals over their attempts to take two West Australian seats off the Country Party in three-cornered contests. An organisation called the Basic Industries Group, made up largely of wealthy graziers opposed to McEwen's protectionist policies and with close links to the Liberal Treasurer, Bill McMahon, had poured $50,000 into the anti-Country Party effort. McEwen attacked them as "the Liberal Party's faceless men"-a description that resonated because memories were fresh of Menzies campaigning in the previous election against the "faceless men" of the Labor Party.

Black Jack didn't mind giving his coalition partners some stick when they deserved it. And McMahon paid a personal price soon enough when McEwen prevented him from contesting the Liberal leadership after Harold Holt drowned. That was an extraordinary use of power. McEwen couldn't have done it without being absolutely confident that his party would back him to the hilt. And that backing was never in doubt.

And he was right to veto McMahon. One of the minuses of being around for as long as I have is that I knew McMahon, too. And he wasn't fit to be prime minister. He proved that conclusively-he was a joke-- when he was eventually given the chance.

I have a particularly vivid recollection of the day McEwen LIFTED his veto. It was after the coalition did badly under John Gorton in the 1969 election and David Fairbairn announced a leadership challenge. McEwen says in the book that he did it because the Liberals were so bereft of leadership talent. In any case, he was about to retire anyway, so wouldn't have to put up with it for long if McMahon won.

It was Melbourne Cup Day. McEwen invited McMahon to his house in Toorak. Billy was so eager that he caught a cab rather than wait for a Comcar. McEwen writes in the book that McMahon was jubilant at the lifting of the embargo. That's an understatement. Billy rushed out and hit the phone straight away, and I must have been one of the first people he rang because he was still bursting with excitement.

"Loddy, Loddy" he said. Bill talked like that. He couldn't pronounce his "Rs". "Loddy, Loddy. He says I can run!" That's power. Being able to choose who can and can't contest the leadership of another party. It's Godfather stuff, when you think about it.

As we talked about his imminent retirement over that cup of tea in 1970, I asked if he'd had any direct approaches to join the Liberals. He said: "Yes, I have had many varied approaches. I haven't any doubt that, if I had joined them, I would have succeeded Menzies and I have no doubt that this would have been acceptable to Menzies."

So why didn't he succumb to the temptation? His answer was this: "Because of my sense of loyalty to the Country Party. I had come into politics as a Country Party man and I had been expelled from my party while a minister. That was the moment I could easily have joined the Liberal Party, but I didn't-I started another Country Party."

McEwen says in the book he didn't think there was the slightest possibility of him becoming Prime Minister without changing parties. But there was certainly talk about this after Holt's death.

I remember Tasmanian Independent Senator Spot Turnbull making front-page news by calling for Black Jack to continue as Prime Minister "until a member of the Liberal Party has been trained to take over the leadership". Turnbull said: "It is now nationally recognised, except in the Parliamentary Liberal Party, that John McEwen is the man for the job."

After the memorial service for Holt in Melbourne, federal and state Liberal Party officials held a secret meeting where there was a strong push for amalgamating the two coalition parties and making McEwen leader. The idea came to nothing in the end, but it was a serious discussion.

You read the Howson diaries and you find that,as late as 1970 when McEwen has hit the three score years and ten, there are entries like this...

I went around to see John McEwen...If he,McEwen, were leading the combined parties at present, there would be nothing to stop us winning the next election, whereas under the present Prime Minister, the chance of us staying in government might be no more than six months...I hinted at the possibility of a caretaker premiership by McEwen.

As well as showing that the Liberal Party was in a mess, all this indicates the respect there was for John McEwen. After Menzies went, he was head and shoulders above everyone else in the coalition. And when you talked to him you understood why. There was a substance to McEwen that you never felt with John Gorton or even Paul Hasluck. And certainly not Billy McMahon.
When people talked about the Country Party tail wagging the Liberal dog, McEwen didn't deny it. He told me once:

I think that, rather more than other parties, the Country Party fellows feel they're here for a purpose-they want something. Mostly they live in a pretty tough environment, climatically and economically, and none of them are dreamers. I really think we've got a greater sense of knowing what we want.

We've had a reminder today of how the Labor Party treats its heroes. Honors them. Fetes them. Builds them up. Takes advantage of them.

I'm glad that, with the publication of this book,the National Party is doing the same.