Labor Senator Murray Watt has run out of puff in his criticism of the Northern Australia Infrastructure Facility (NAIF), making simple errors in maths and reading comprehension.

In NAIF’s release of 19 September, it lists the six WA projects which have received investment decisions and conditional approvals, including the Pilbara Minerals project, which is not proceeding in its original form.

In the same table, job figures are attributed to the five projects which are proceeding. Those jobs total 1,320.

No jobs have been attributed to the Pilbara Minerals project.

In my media release of the same date, I state more than 1,300 jobs are estimated to be created across the WA projects.

There is no discrepancy in these two statements.

The Pilbara Minerals project continues to be publicised as a case study for the NAIF because it provides a useful guide for potential NAIF applicants to refer to.

Senator Watt’s release also misleads on the contents of a report in the Rockhampton Morning Bulletin by attributing a quote to me which never existed. The dollar-figure which appeared in the article was the result of the journalist doing his own maths on figures provided by my office in the interests of transparency. See copy below: 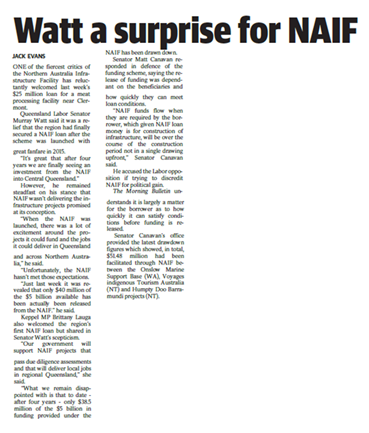 Clearly, Labor does not have the interest, ability, capacity or commitment to provide support to the development of Northern Australia.