Resource regions do deserve a better cut - The West Australian 13.9.16

One of the latest things to go viral on the internet is a video of an iron train from the view of someone stuck in Port Hedland waiting for it to pass. The challenge is to count the number of wagons. It is easy to lose concentration and everyone seems to come up with a different number. For the record, I counted 236.

Each one of the wagons carries about 100 tonnes and a tonne of iron ore is worth about $75 at the moment. That is more than $1.7 million a train.

It was a hard-fought battle. One of the biggest iron ore exporters today, BHP Billiton, initially opposed lifting the ban, mainly to protect its domestic steel-making business.

The ban was finally removed, in part because Australia was suffering from a balance of payments deficit. We needed more exports to pay for the surge in imports after the removal of import restrictions in 1959.

It worked. Today, that $1.7 million train of iron ore that we send to Asia helps us to pay for lots of consumer goods coming the other way. To put it into perspective, that train could buy 3200 40-inch LED televisions.

Five years ago, when iron ore peaked at $176 a tonne, that train could buy roughly 6000 televisions.

Even taking into account how much cheaper TVs have become in recent years, today it is still a lot of purchasing power driven by iron ore. This “terms of trade” boom has helped us record 25 years of uninterrupted economic growth, the second longest period in our history. We got through the global financial crisis, not thanks to $900 cheques from Kevin Rudd, but thanks to red rocks from WA and black rocks from Queensland.

You would think that the regions that produced so much of this wealth would be gleaming from the legacy of it. Not so. Middlemount, a mining town in the coking-coal rich Bowen Basin, just had its last bank leave town, and Newman, which I visited last week, is half the size it was during the boom.

Resources is a great part of our national history because, for many places, it is their life story. So many towns owe their origins to the mining booms of previous generations, but this modern day boom has not generated the same regional dividend.

Would we have Kalgoorlie today if fly-in, fly-out had existed in the 1890s? I asked a few locals why there aren’t more people living in Newman. The main answer: schools and hospitals. They are always difficult services to provide in small communities but why can’t more of the wealth that places like Newman generate be invested back in these towns?

Tony, my bus driver who showed me around, said the cost of getting goods to Newman was too high. Again, always a hard thing to do for a small town but why shouldn’t Newman deserve better links to the rest of the country that it has supported over the past decade? I know the WA Government is trying, and the WA Nationals Royalties for Regions program should be applauded as a ground-breaking attempt to develop our nation’s frontiers.

Driving regional growth and development is essential to our future prosperity. The Federal Government is doing just that with a plan to develop our north, including in areas such as the Pilbara, through roads, water infrastructure and providing a catalyst for investment.

During the election, I announced $43 million to improve Marble Bar Road. We have just established a $5 billion northern development bank, too, to build infrastructure throughout the north.

Thanks to the way the GST distribution works, WA loses more than half the $1.7 million generated by that iron ore train. As Prime Minister Malcolm Turnbull said recently, WA has a right to feel aggrieved.

So, I get why Brendon Grylls is looking for answers in proposing a new revenue source from mining to pay the bills. Gryll’s a proved fighter for WA. I wouldn’t throw the punches he is — I don’t think new taxes generally help anything — but I think his objective is the same: regional growth.

The answer should instead be in providing more of our resources wealth back to our resources regions. That way, those counting both the wagons and the minutes ticking by waiting for a 2.5km train to pass in Port Hedland might have a better reason to put up with it. 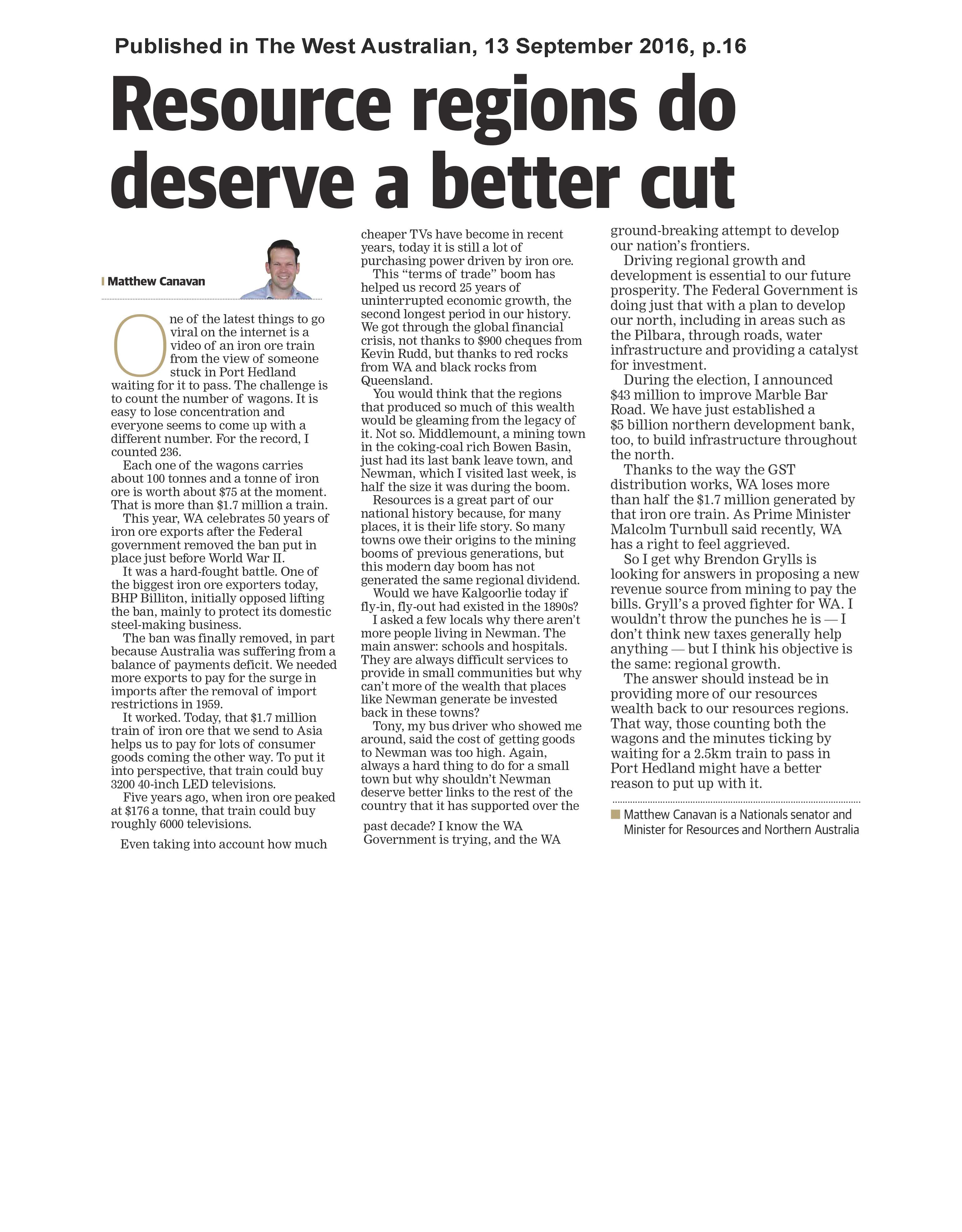