“I am satisfied a facility at Napandee will safely and securely manage radioactive waste and that the local community has shown broad community support for the project and economic benefits it will bring,” Minister Canavan said.

About 80 per cent of Australia’s radioactive waste stream is associated with the production of nuclear medicine which, on average, one in two Australians will need during their lifetime.

Nuclear medicine is used in the diagnosis of a variety of heart, lung and musculoskeletal conditions, and treatment of specific cancers.

This medical waste, along with Australia’s historical radioactive waste holdings, is currently spread over more than 100 locations across the country, like science facilities, universities and hospitals.

It is Australian Government policy and international best practice for this material to be consolidated into a purpose-built facility, where it can be safely managed.

In 2015 the Government began a process to find a suitable site for the facility, which will create 45 jobs and be delivered alongside a $31 million Community Development Package.

Three broad requirements were relevant in assessing potential facility sites. They had to be volunteered by a landowner, technically suitable, and have broad community support from nearby residents.

Three volunteered sites in South Australia have been assessed in this detailed phase of the process: Wallerberdina Station, near Hawker, and two sites near Kimba, Napandee and Lyndhurst.

Technical studies, examining seismology, hydrology and geology, amongst other factors, concluded that all sites could safely and securely store radioactive waste with appropriate mitigations.

It was found the complexity and costs associated with the mitigations would be greater at Wallerberdina than at the two Kimba sites, and of those, greater at Lyndhurst than Napandee.

A community ballot undertaken in December 2019 indicated that the majority of the community near Wallerberdina Station did not support the facility (47.33 per cent in favour).

In contrast, 61.6 per cent of voters in Kimba support the proposal. The broad support of the Kimba community is reflected in:

“Based on these technical assessments and community sentiment indicators, I have identified 160 hectares at Napandee to host the facility,” Minister Canavan said.

“Napandee was volunteered by the landowner, is suitable from a technical perspective, and has broad community support from those who live and work nearby.

“Compared to the other site in Kimba (Lyndhurst) establishing the facility at Napandee would be less technically complex, and has stronger support from direct neighbours.”

Minister Canavan said today’s announcement concluded a significant step in a consultation and technical assessment process that would continue for years as the facility was designed and delivered.

“This will include further site-specific technical and regulatory approvals, and close work with Aboriginal communities to identify and protect any heritage” he said.

“The facility has broad community support in Kimba but I acknowledge there remains opposition, particularly amongst the Barngarla People and their representative group.

“We will work with Traditional Owners to protect culture and heritage, and to maximise economic opportunities and outcomes for local Aboriginal communities near the future facility.

“We’ll also work with the Barngarla People on an Aboriginal Cultural Heritage Management Plan to manage heritage values around the site, as well as an Aboriginal Economic and Heritage Participation Plan.

“I also acknowledge concern about potential agricultural impacts. Experience around the world is that waste and agricultural industries can coexist, but we will work to provide more assurance.

“And after a sustained effort from outside anti-nuclear groups, I also acknowledge submissions from people who do not live in Kimba demonstrated concern about the facility proceeding.

“I will proceed with the project in a way that recognises and respects views of those who oppose the facility, including the Barngarla People and those with agricultural interests,” he said.

“I will ensure there is ongoing support for the community and that future planning and development for the facility proceeds in a respectful way.

“In coming weeks, I will introduce legislation that declares Napandee to be the site of the facility, and establishes a community fund to support Kimba in hosting the facility.

“Further information supporting my assessment, including submissions, will be publicly released along with the legislation, after privacy and commercial matters have been reviewed.

“I thank the people of Kimba, Hawker, Quorn and surrounds, Traditional Owner groups, the Kimba District and Flinders Ranges councils and Outback Communities Authority for their participation in this process.

“This announcement is the culmination of a search that has been ongoing for more than 40 years.”

For more information about the project, including artist’s impressions, 24 dedicated fact sheets, and stories from monthly community newsletters, go to www.radioactivewaste.gov.au 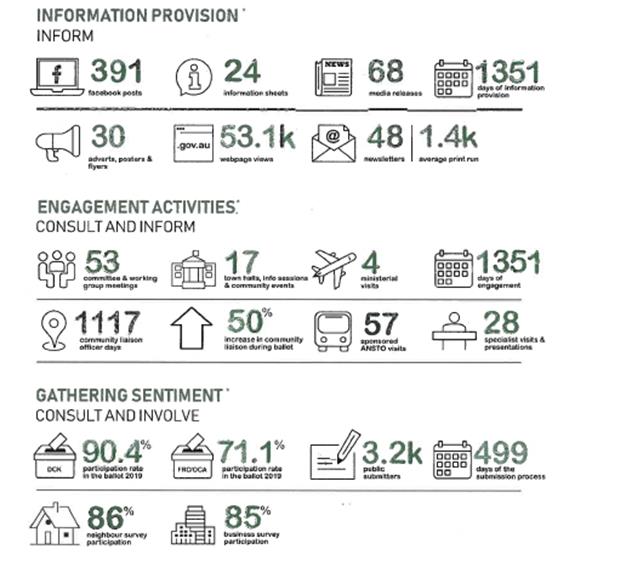