Australia has 16 cities with a population of more than 100,000 people. Three of our youngest five cities, Cairns, Darwin and Townsville, are in Northern Australia. These three cities were all established within around a decade of each other, from 1865 to 1876.

It was not a coincidence that these towns were established just after the first gold rushes in southern Australia. The Burke and Wills expedition, of 1860-61, itself was financed by the wealth from the gold rushes.

We are just emerging from the biggest mining boom in Australia since then. The legacy of the 1850s and 1860s was formative for Australia. Victoria quickly became the most populous state, many towns were based around goldfields and the new found wealth gave Australians confidence to explore their nation and develop new parts of it.

Will we leave the same legacy from our mining boom?

Perhaps not, it is a different environment today. Back then there was no income tax, no corporate tax, no federal government and certainly very little red or green tape. Because developing new areas is always a risky business, modern taxation systems actively discourage development of new areas.

Let’s say you make an investme

nt that is risky. With equal likelihood the investment could give you either a $100 profit or an $80 loss. Without tax this investment would deliver an average profit of $10 so you should take the plunge. With say a 30 per cent corporate tax rate things completely change. Your $100 profit becomes just a $70 profit and the loss is still $80 (assuming you can’t transfer the loss). The same project now delivers, on average, a $5 loss so the investment won’t be made.

Developing northern Australia will certainly be a risky business. There is no low hanging fruit because if there were someone would have picked that fruit already.

So if we are serious about encouraging people to make risky investments in northern Australia we must reform our tax system to encourage such investments. I will outline three possible ideas here – although there are lots of ways to the top of this mountain.

First, many would not be aware that there is already a tax benefit that seeks to encourage northern development. In 1945, the Australian Government introduced an allowance for Australians living in northern Australia because of “the uncongenial climatic conditions, isolation and high costs of living in comparison to other areas of Australia.” It was set at £40 (A$72) for areas in remote areas, and £20 (A$36) in other parts of northern Australia.

The boundaries for getting the rebates have not been changed at all. People in Cairns and Townsville still get $57 a year for living in an area of “uncongenial conditions”. The zones are out of date, no one will move to Cairns for a carton of beer a year.

We should reform these rebates by better targeting them to areas that really do lack public services and increase them so that they really do attract people to move to northern Australia. The zone tax rebate costs Australia $285 million a year so there is a substantial amount of money to allocate.

Some argue that the constitution restricts such tax rebates because under section 51(ii) the Commonwealth does not have powers of taxation that “discriminate between States or parts of States.” Yet, the zone tax rebate has been in place for 70 years without challenge.

Second, zone rebates can help workers move to northern Australia but businesses must move too for jobs to be created. The recent Northern Australia green paper identified agriculture as a key driver of those potential future jobs. There is more than 5 million hectares of land that can be irrigated in the north, an area where we use less than 5 per cent of the water available.

The tax act provides for accelerated depreciation for investments in dams, tanks, bores, wells, channels and windmills for irrigation purposes. Investments in these items can be depreciated over 3 years, which is in general much shorter than their economic life.

Section 75B of the tax act used to provide for the immediate deduction of investments in these kinds of assets. That is, a farmer could deduct the construction costs of a dam in the year it was built. If we want to encourage investment in new irrigation areas, we should consider reintroducing this provision. When you talk to farmers today, many of them comment that the removal of section 75B has substantially reduced incentives to invest in irrigation infrastructure. 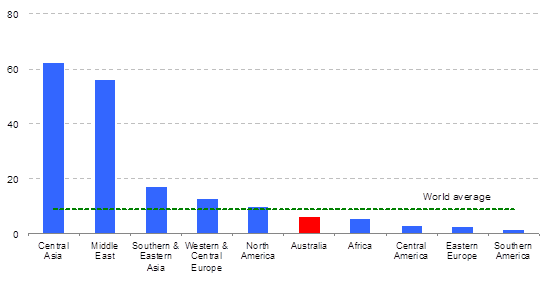 Increasing investment in infrastructure that uses water should be a basic goal because we use too little of our water resources compared to other countries. Australia uses just 6 per cent of its water resources compared to a world average of 9 per cent. If we lifted our investment to the world average we would be more than halfway to doubling our food production target through that action alone.

Farmers will need ways to quickly and efficiently get their produce to market so investment in irrigation infrastructure will be essential. Some are growing cotton successfully in the Gulf right now, but the $70 to $80 a bale it costs to transport to the closest gin at Emerald destroys the economics of it.

In the 1960s the Menzies Government invested in beef roads and their legacy is still seen today. To drive growth in the north we will need a new surge in investment in northern infrastructure. Back then public funds were used, now we have $667 billion of Labor debt.

At the last election, the LNP promised to investigate the possibility of providing a tax benefit for investment in nationally significant infrastructure. The benefit would be based broadly on the municipal bond scheme in the United States. That scheme exempts the profits from certain infrastructure provided by local governments (or municipalities) from federal income tax. The size of the US municipal bond market is around $3.7 trillion, about 10 per cent of the total US bond market. It has proved to be a stable and popular way of funding infrastructure in the United States.

Australia does not have a sizeable or stable non-government bond market. A frequent criticism of Australian superannuation funds is that they invest too much in equities, but in fairness there are not many fixed income options in the Australian market.

There are many ways to change the tax system to encourage development of northern Australia. I have just gone through a few ideas here. What is not in doubt is that the tax system can be used to direct investment into some areas but not others.

From 1696 to 1851, the British Government imposed a “window tax” based on the number of windows in a house. The idea was that the number of windows would be a proxy for wealth. The response was obvious as people cut back on windows, and some floors had no windows at all to avoid the tax. There is even a report that 52 people died due to a lack of ventilation in a house with no windows, ostensibly to avoid the tax. Changing taxes is one of the quickest ways to change behaviour.

We want more Australians to move to, and invest in, northern Australia. Achieving that will be a lot easier if we encourage private investment as well as public. The tax system should be one cannon in our policy armoury that we use to attract investment in our north.